...
...
...
Sorry I just realised that the hair on my head looks like the hair on Rick Ross’s face – and now that shall never be unseen. Anyway OMARION RELEASED HIS FIRST MMG EP! WOO! CAPITAL LETTERS! What’s it like? Well it’s kinda like a Fruittella with about 85% lemon ones; it’s alright because it’s Fruittella and some parts are actually decent, but to be honest when it’s all said and done you look down and realise you expected much more than this.

Problem is very few songs on this nine track EP (seven excluding the intro and Rick Ross's uhm, talking thing interlude) are memorable bangers in the way that O, Touch or Speedin’ were, or even more recent tunes like Let’s Talk, and no given the general topics of Omarion’s music “bangers” was not a pun. The EP just sort of passes you by as you listen to it, not really dropping anything on you other than the fact that is a new Omarion track, and you should be in awe as it’s a song by The Untouchable Maybach Empire. Don’t get me wrong, Omarion does a lot right here but he does more stuff averagely, which is disappointing as Maybach O is actually a damn good artist.

Now lyrically the EP is everything you’d expect from Omarion – it’s that “Baby I’m gonna make you say”, “But honey why did you do this to me”, “I want to touch you a lot tonight” kind of stuff from start to end and for the most part he steers clear of cheesey lines and awkwardness, but hardly crosses the line into originality. Sure MIA is probably the most original song on the EP (though technically this was a song from Self Made Vol. 2), but when you actually listen to the lyrics it’s more generic than it seems. Additionally delivery is average generally, though in some parts Omarion really does kick it into gear. For example in Trouble he jumps into a nice bit of vocal acrobatics, creating the best and most catchy song on the EP, even if Joe Budden does just okay on it. Other times Omarion gets completely outshone by the featured artists on the track, as he did in Admire when Tank comes in and finally injects some life into a song that was really dragging its feet. 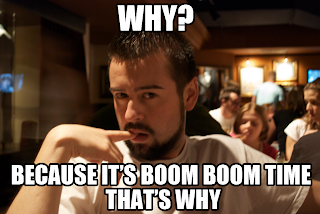 But I think the main problem with the EP is the lack of atmosphere the songs create. Let’s be frank – SHOUT OUT TO MY BOY FRANK EAST LONDON YEAH– we all know what kind of music this is: boom boom music. When you play it, stuff be flying up, and the boom boom be going down. So an atmosphere needs to be created, and that atmosphere needs to be felt and felt consistently. Even songs that aren’t strictly boom boom tunes like MIA or Admire need to create some sort of atmosphere that as a listener you can get into to really enjoy the song, and few songs – in fact maybe just Trouble, MIA and to an extent Out Loud – actually pull it off properly.

I feel to give Omarion a little slack because it’s his first MMG release, so creatively there may have been some things he had to change or the pressure of needing to make a proper impact etc etc etc BUT, at the same time, it’s Omarion. He’s a seasoned veteran capable of making amazing music, though here, where the mere idea of his solo EP invokes excitement, he’s just alright. I’d recommend a download as it is decent overall, just don’t expect anything you know, mind detonating.

You can download and listen to the EP via the DatPiff player below: