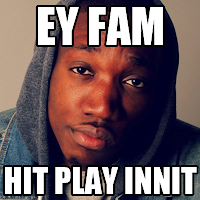 You know it creeps me out when an artist I’m reviewing has a picture of themselves looking at the camera as their album cover – I end up looking at the cover a lot and after a while it’s like it says “Welcome back Reesh, I’ve been expecting you.” But I’ll tell you this: Just Viv’s Uncommon Sense mixtape/LP/kind-of album is very much worth the feelings of mild awkwardness you’ll get from intense play.

A South Londoner, Just Viv is a 22 year old rapper/singer, previously known as the mononym REC. He describes Uncommon Sense as ‘a battle between his wants and his needs’ and when you listen to the well written lyrics against the generally smooth instrumentals it’s hard not to agree with him. The mixtape feels high quality, with the amount of work (apparently two years) being immediately apparent in every track .

One of the things that most impressed me about Uncommon Sense was the lyrics – Viv has more bars than HMP Wandsworth, really. From the very start in Identity he manages to construct an interesting, entertaining narrative with witty observations free of clichés, and while a lot of flows we may have heard before, Viv’s confident and stylish approach claims each as his own for the duration of every track. This can most clearly be seen in Sunshine White Wine & Breakups where Just Viv really comes into his element with a headbopping powerful delivery of lyrics giving a slightly different take on summer love, all the while supported by a glossy Clams Casino beat. I have to say though I did cringe each time he said “Drive slow DOGGIE” in Stay In Your Lane, which covers Kanye West’s Drive Slow, when he could have easily said “homie” like the original. However that’s a very minor gripe and could honestly just be my childish mind looking at all sorts of strange connotations.

His singing is a bit more debatable. Generally it works well (e.g. SWW&B and Trivial Pursuits) but I have to admit that at some times it really put me off. Not that it’s Rylan-horrendous, it’s just that it simply doesn’t fit, leaving you with a very awkward experience which is perhaps most clear in Naïve. The rapping in this track, as well as the singing at the end where the tune switches over is much better, but in this as well as a couple other songs you can’t help but think “damn, If it wasn’t for this part of the song I could get married to this ting.”

Productionwise everything works, with a varied yet similar selection of beats covered including a working of All I Need To Get By and Final Fantasy X’s beautiful To Zanarkand, as well as a few well constructed and utilised originals. Each beat fits in with the feeling of the track, making for a consistent and atmospheric feeling throughout.

Anyway, click download now please. This free mixtape/LP/Album should be on your MP3 if you’re into British rap. It’s that simple. Just Viv is one of those rappers; those rappers that are truly talented but are yet to get the recognition they deserve and so remain in the patient MP3 players of an enlightened few, biding time until their eventual outbreak in a majestic, firebreathing dragon-like splendour for all to see and gaze and ogle upon. After you enjoy that slightly over the top metaphor do click download – you won’t regret it.