I like to think that when an artist makes a song they think to themselves “yeah, this is good! This is representative of my talents, and is a great piece that my fans will love, as I loved making it!”
Now, with that in mind - just what the hell was Gucci Mane thinking when he made this?

What is this? Is this music? I tried playing it to my mum’s cabbage outside (I don’t like cabbage) and it survived so I know it’s not a herbicide – is it a hat?

Assuming this is music, maybe I should have lowered my expectations for the Spring Breakers star’s latest solo mixtape, but my expectations were already low and I’m not a Lil John video - I can only go so low. This is mixtape is terrible, and while I could just leave it at that, as a reviewer and not one to make unsubstantiated claims, I will expand on why in fact this (as the kids say) sucks major butts. 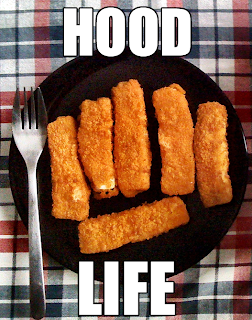 First of all I defy you to find a single moment on the mixtape where Gucci says anything of any real meaning. Go ahead. I made this sentence blue so you could try it and come back easier. EVERY SONG is just a big bubbling blob of basic braggadocio which quickly becomes monotonous, leading you to feel that you essentially have heard the same song 17 times. And of course being the rapper who gave us such double-negativetastic lines as “Ten thousand dollar bounty put on my neck, I hope you didn't pay them cause they didn't have no success.” some lines just discombobulate you, in a bad way. For example in Thirsty he says “They aint my kids and they blaming you for Exidoe [don’t even know what word that was] / they aint my kids but I gave them all a twinkie though!” ... right. On the other hand some lines are so ridiculous or random they're actually comical, such as “If you really love me baby you’d let me f*ck your buddies!” (Crush) as is the fact that in two songs (Thirsty, Dumb Fine) he mentions that ‘hood b*tches eat fishsticks’. I didn’t know that. I was thus educated.

But I know what you’re thinking; ‘these types of songs you listen to more for the feeling of it rather than the words! You know, placebo music!’ Well get those exclamation marks out of your brain; none of these songs are even fun to jump around to. Seriously. In fact, it’s barely even fun to sit down to. His flow is at all times basic and very rarely do the instrumentals add an enjoyable edge to anything, with the best try coming from Playin’ With The Money, which could have been an alright song to smash things to, if only Gucci’s chorus was catchy, instead of being almost catchy - a shame. Additionally Don’t Deserve It is alright in the same way, with Gucci’s most hypeable flow making it one of the best songs on the tape, though really and truly competition was so thin if it stood sideways it’d be invisible.

Now I’ve looked at Trap Back 2 from every possible angle to try and develop some form of appreciation for it, and what I would say is that he’s consistent. Each song feels like it’s part of the same body of work, which admittedly is difficult for some artists. Then again that body of work is just awful, so I guess I’m kind of praising him for being consistently... awful? Hmm. Anyway if you’ve done something horrible to someone today and seek punishment, you can listen to it below, otherwise for something more interesting, here’s a gif of paint drying.